On Sunday the 19th June the Worthing Community Chest were invited to the official opening of Worthing Croquet Club’s new clubhouse at Field Place. The Club has been based at Field Place for over ten years, but had to relocate due to the needs of the centre.

As the Croquet Club were having a special day the team from the Community Chest came along to present the Club with their grant cheque. The club has 40 members and due to relocation costs they applied for a grant to cover the cost of competition balls. 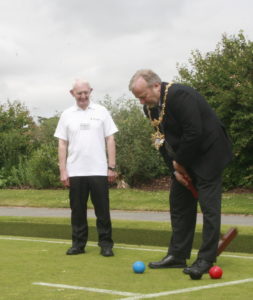 The Mayor & Mayoress of Worthing performed the opening ceremony of the club house and straight after trustees Malcolm  Brett and Ann Stimpson presented Croquet Club Chairman, Arthur Wells, with a cheque for £1218.00.

The afternoon was rounded off with a splendid afternoon tea consisting of beautifully cut sandwiches and delicious cakes.

Malcolm was then given the privilege of being the first person to use a set of the new balls and tried his hand at Croquet. The Mayor then also tried his hand.

“Our best wishes to the club and wish them a long and happy stay in the club house” said Malcolm “May they have many years use of the new balls!” 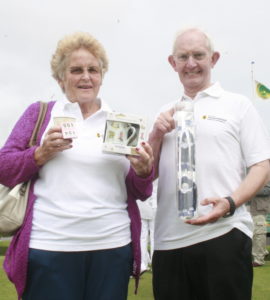 Malcolm and Ann with their winnings

Arthur Wells from the Croquet Club thanked the Community Chest for the grant “We feel certain their generosity will encourage new members to join our club. Our existing members already appreciate the improvement in the croquet balls”

“It is very clear that the Worthing Croquet Club provides an active environment for enthusiasts of all abilities” said trustee, Ann “Hopefully the new balls will help them to win lots of matches!”

Malcolm and Ann were both lucky enough to win a couple of the raffle prizes! A great day for everyone.

We use cookies on our website to give you the most relevant experience by remembering your preferences and repeat visits. By clicking “Accept All”, you consent to the use of ALL the cookies. However, you may visit "Cookie Settings" to provide a controlled consent.
Cookie SettingsAccept All
Manage consent